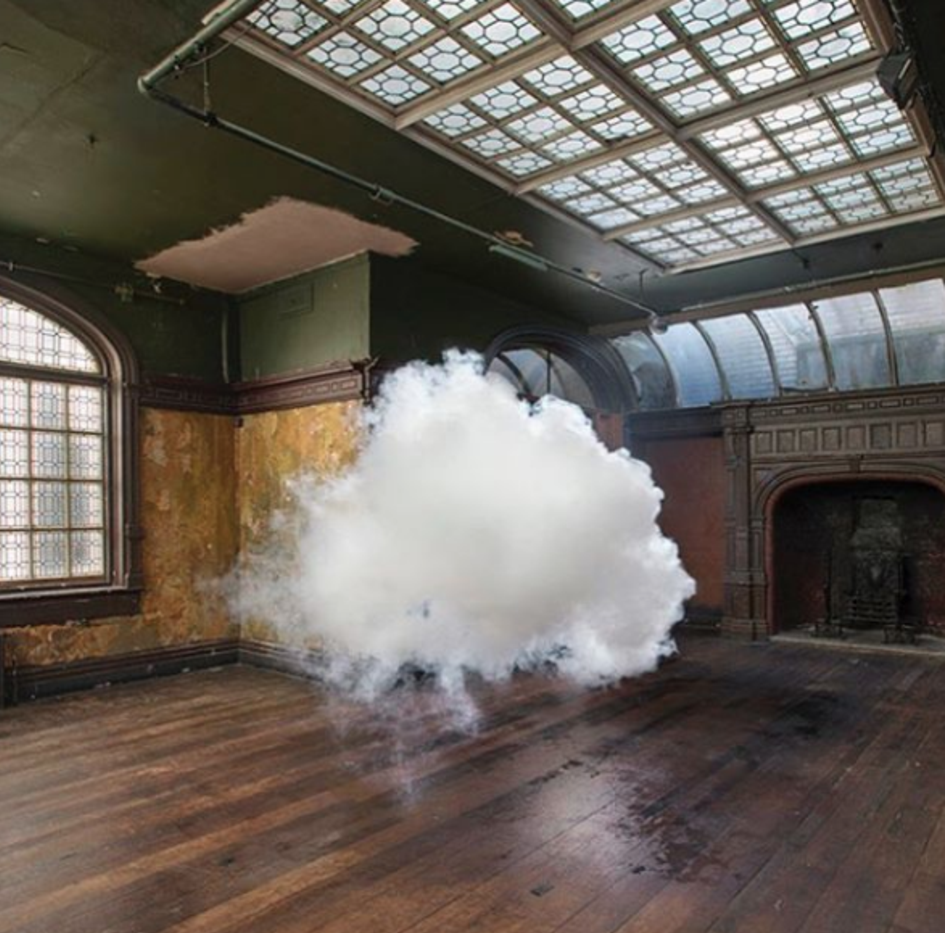 BACK TO THE VISION

The Dutch artist is known for his “Nimbus” series, in which he creates perfect, fluffy clouds in unique indoor spaces: churches, castles, dungeons, and most recently, in honor of Frieze New York, NeueHouse on 25th Street. The only lasting memory of his series is singular photograph—the perfect picture of the cloud in that space—which Smilde and his team work endlessly to capture.

And with a gentle poof, the first nimbus was born—but only for a few seconds, morphing into different shapes before dissipating into the air. Smilde and his team huddled over their computer. Nope, that one won’t work.

Left: Smilde spritzes water vapor into the air. Right: A cloud is born.

Smilde has been doing his “Nimbus” series for several years now, across the globe—London, Germany, the Netherlands, and now, New York, just to name a few. He told us the idea came to him when, after working with installations and sculptures, he “wanted to make an image of total disappointment. Like there was nothing to see in the space—it was just a cloud.” Plus, he loved the duality of bringing something outdoor, indoor, as well as the duality of clouds themselves. “They can, for example, stand for the divine but also for something threatening or misfortunate,” he said. “Clouds are something really universal. Something that people give meaning to.”

It’s true—it was hard not to play the “that looks like . . .” game with each shape that appeared in the humid gallery (and can you ever forget thatheartbreaking cloud-watching scene from Up?). Smilde smiled and nodded as we told him what we saw—a giant, a blimp, and in one case, a Goldfish cracker—as well as the beauty and calmness we felt as the cloud dispersed into the air. “I really want people to project their own ideas onto their work,” he said.

And what does Smilde see in his clouds? He won’t tell. But he tries not to see specific shapes, as once he does, he can’t get it out of his head. “Sometimes I’m working with people, and my girlfriend says, ‘This looks like a shrimp,’ and then, O.K., I cannot use it anymore.”

He thanks us for coming, and returns to his computer with his team, looking at the most recent photo of his nimbus. He slightly shakes his head. The final image still isn’t there yet—it could take hours. Smilde was off to chase another cloud.