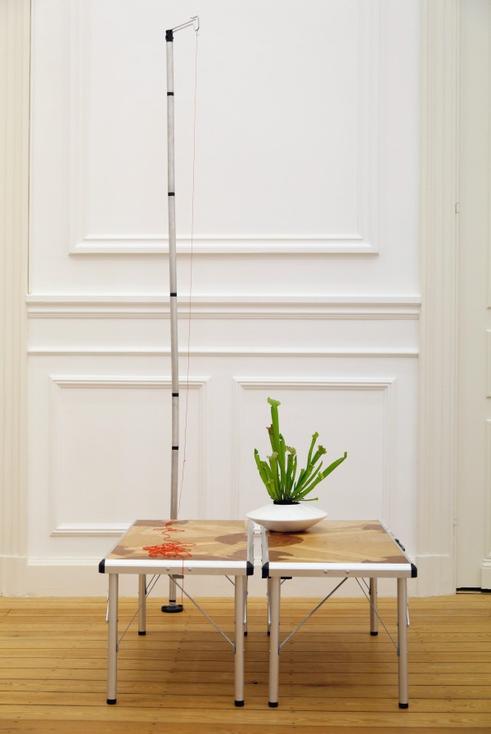 BACK TO THE EDIT 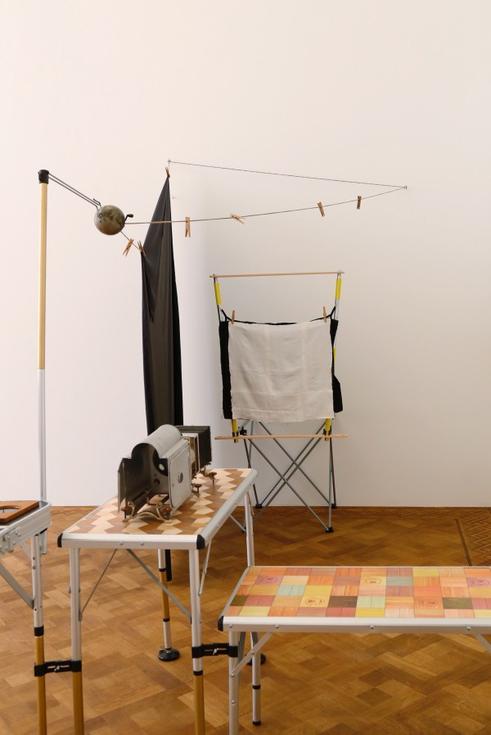 The term Outpost can mean a remote military station, a commerce site, or a settlement. It always implies forward motion in terms of territory (space), but backward motion in terms of that space lacking civilization in the form of agriculture, plumbing, a legal system, etc. However primitive, like a campsite, or sophisticated, like a motorcycle, an outpost is always pulled in two spatial directions at once. This tension creates the drama that gives the outpost its romantic appeal.

In the context of this exhibition, the Outposts are temporary stations made by hacking standard camping equipment with a wide range of materials—brass, leather, aluminum, plastic, wood, stainless steel, fabric. The Outposts come directly out of Scanlan’s research with the Broodthaers Society of America, and how Marcel Broodthaers‘s notions of conquest and technology have influenced his thinking. Not only in relation to these new works, but in retrospective as well. A bathroom floor is a kind of outpost—even when it’s in an apartment centered in a major city. So is a Nesting Bookcase, or a fictional character created to wander the earth and stake out various positions.

The fantasies of the American West, from the Grand Canyon to Silicon Valley, are implied by the Outposts, as are the mythic characters of the camper, the squatter, the Hell’s Angel, the entrepreneur. Each Outpost includes some form of outmoded technology — a slide projector, a typewriter, a magic lantern, a carnivorous plant — that speak to the idea of “roughing it” in technological terms, suggesting that each outpost is located in a distant time as well as space. There is a faint aspect of science fiction to them.

Several large paintings made from stretchers without canvas and with paint applied to the crossbars instead are displayed in the space. As outposts positioned on the wall they behave like monitoring devices, transparent screens supported by an underlying grid that intercept the viewer’s eye and control it. The transparency of the paintings is an illusion that makes us thinking we are “getting to the bottom of things.” In fact, we are only being controlled by the paintings in different, but equally deceptive, ways.

The Outposts positioned on the floor and on the wall have an integral relation to each other in the exhibition. The Outposts on the floor represent the idea of escape (autonomy) and theIntercepts Outposts on the wall represent the idea of capture (surveillance, discipline). Depending on who we are, we negotiate these positions —and position ourselves, our subjectivity—along a carefully calibrated spectrum between the binaries of private and public, freedom and control.​