Zhang’s colour palette and playful sense of the grotesque take their cues both from art history and contemporary culture. The legacy of cartoons such as Ren and Stimpy, that bastion of gratuitous snot and slime and decaying flesh (which first aired the year Zhang was born), and the more sanitary but equally globular subaquatic world of SpongeBob SquarePants, can be seen in the icky textures and monstrous bulges of Zhang’s expanding polyurethane, silicone and enamel sculptures. At the other end of the material spectrum, her ongoing series of drawings executed in Microsoft Powerpoint sees the introduction of grids on which repeated abstract forms are overlaid with slight shifts in registration. Recalling the cel animation process, whereby a number of transparent sheets are overlaid to form a composite image, Zhang’s Powerpoint images are inescapably two-dimensional by virtue of being made with a computer program, however as with any good cartoon, they become worlds with their own set of rules for space and dimensionality.

Louise Zhang is a Sydney-based artist currently undertaking a Master of Fine Arts at UNSW Art & Design (formerly COFA), where she received First Class Honours in 2013. Her debut solo exhibition, Plomp, was held at Artereal Gallery in 2014, and Zhang has participated in group shows in Sydney, Brisbane and Melbourne including at Edwina Corlette Gallery, MOP Projects, Artereal Gallery and Melbourne Art Fair. 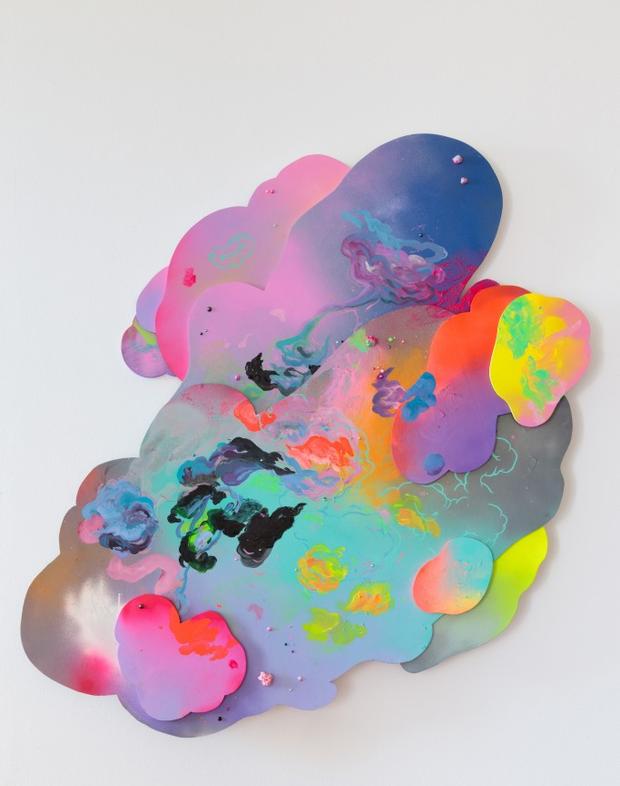 BACK TO THE VISION

Louise Zhang creates objects that are designed to allure and repel. Depending on your proclivities, her paintings and sculptures could have either or both effects simultaneously. Zhang’s paintings and painted sculptures are blob-like in form, slippery in texture and lurid in colour. Their brightness and playfulness are striking and their ambivalent forms can be unnerving, in the same way that the wobble of jelly evokes terror in some.

In one sense Zhang’s works are entirely abstract – they do not represent forms from the real world. They are, however, representational in that their infinite mutability reflects that of the blob. If ‘the blob’ can be defined as a real object, then Zhang’s works are not so abstract after all.

Zhang is working in a long tradition of representing the grotesque in art. From Hieronymus Bosch’s early 16th century masterpiece The Garden of Earthly Delights, to Hogarth’s satirical etchings, right through to Patricia Piccinini’s hybrid silicone creatures, imagery of the not-quite-recognisable has always inspired conflicting responses of fascination and horror. When forms are somewhat bodily but not quite as we expect them to be, there is a response of fear and abjection. In Zhang’s work, an additional layer of confusion is introduced by her use of colour. Her saturated neon pigments are eye-catching, seductive, even cute and friendly. That these colours are a thick gloss over a blobby mound, or a congealed suspension in a glass vial, is secondary – we are initially attracted, which makes it all the more disturbing when we do come to contemplate the underlying forms and substances.